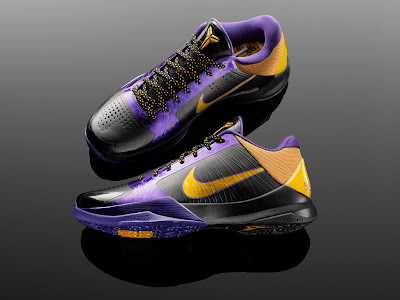 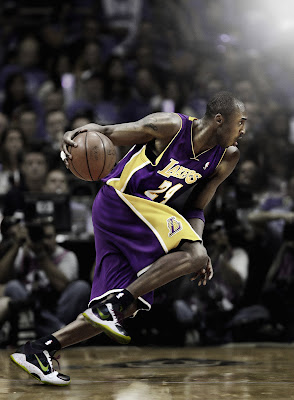 Kobe, we like your style man. Your Soccer inspired style . “I watch a lot of soccer and have seen how the best footballers in the world make sharp cuts at top speed in lightweight, low-cut footwear,” Bryant said. “The demands they make on their feet and ankles aren’t that different from what I’m doing on the court, yet nobody assumes they should play in high tops.”

With Bryant’s observation as inspiration, the gang at Nike Sports Research Lab conducted hundreds of hours of testing to create a low-profile shoe that did not compromise stability or lockdown. Nike researchers created a shoe with exceptional performance that moves with the foot and allows for multi-directional cutting. and Kobe Bryant today announced the debut of the Nike Zoom Kobe V, the brand’s lowest-profile and lightest basketball shoe to date. Bryant challenged Nike to make his signature shoe even lighter and lower than the Nike Zoom Kobe IV he debuted during his 2008-2009 championship season. Nike responded with the Nike Zoom Kobe V, and we’re glad they did. The Nike Zoom Kobe V will be available first online with a unique Nike iD retail campaign launching December 26, 2009. A broader brick and mortar retail launch will occur January 16, 2010 throughout the U.S., Canada and Europe. ¡Dale!