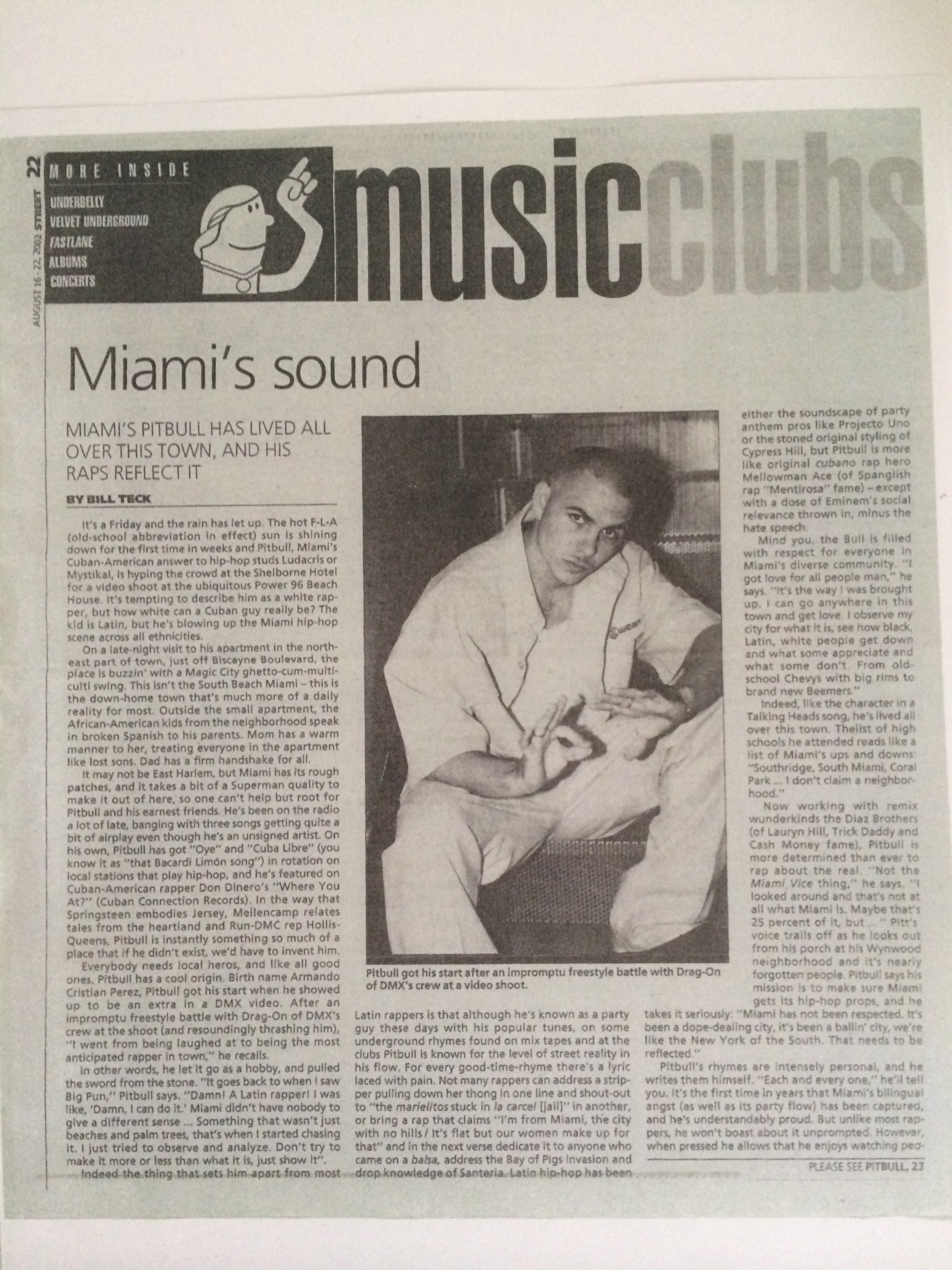 In 2002 Gen ñ founder Bill Teck wrote the first article about Mr. Armando Christian Perez, aka Pitbull and it was published in street magazine, “i recently updated that article after spending a few days on tour with Pit”, said Teck, “but i wanted people to see the difference in his life, so we’re reprinting that ’02 article here”. The new one, will be published here next week.

It’s Friday and the rain has let up. The hot F-L-A (old-school abbreviation in effect)

sun is shining down for the first time in weeks and Pitbull, Miami’s Cuban-American

answer to hip-hop studs Ludacris or Mystikal, is hyping the crowd at the Shelborne

Hotel for a video shoot at the ubiquitous Power 96 Beach House.

It’s tempting to describe him as a white rapper, but how white can a Cuban guy

really be? The kid is Latin, but he’s blowing up the Miami hip-hop scene across all

On a late-night visit to his apartment in the northeast part of town, just off Biscayne

Boulevard, the place is buzzin’ with a Magic City ghetto-cum-multi-culti swing. This

reality for most. Outside the small apartment, the African-American kids from the

neighborhood speak in broken Spanish to his parents. Mom has a warm manner to

her, treating everyone in the apartment like lost sons. Dad has a firm handshake for

It may not be East Harlem, but Miami has its rough patches, and it takes a bit of a

Superman quality to make it out of here, so one can’t help but root for Pitbull and his

earnest friends. He’s been on the radio a lot of late, banging with three songs getting

quite a bit of airplay even though he’s an unsigned artist. On his own, Pitbull has got

Dinero’s “Where You At?” (Cuban Connection Records). In the way that Springsteen

Hollis-Queens, Pitbull is instantly something so much of a place that if he didn’t

exist, we’d have to invent him.

Everybody needs a local hero, and like all good ones, Pitbull has a cool origin. Birth

name Armando Cristian Perez, Pitbull got his start when he showed up to be an

extra in a DMX video, “I went from being laughed at to being the most anticipated

rapper in town,” he recalls.

In other words, he let it go as a hobby, and pulled the sword from the stone. “It goes

can do it.’ Miami didn’t have nobody to give a different sense…Something that

wasn’t just beaches and palm trees, that’s when I started chasing it. I just tried to

observe and analyze. Don’t try to make it more or less than what it is, just show it.”

known as a party guy these days with his popular tunes, on some underground

rhymes found on mix tapes and at the clubs, Pitbull is known for the level of street

reality in his flow. For every good-time-rhyme there’s a lyric laced with pain. Not

out to “the marielitos stuck in la carcel [jail]” in another, or bring a rap that claims

“I’m from Miami, the city with no hills / It’s flat but our women make up for that”

and in the next verse dedicate it to anyone who came on a balsa, address the Bay of

Pigs invasion and drop knowledge of Santeria. Latin hip-hop has been either the

thrown in, minus the hate speech.

Mind you, the Bull is filled with respect for everyone in Miami’s diverse community.

anywhere in this town and get love. I observe my city for what it is, see how black,

Indeed, like the character in a Talking Heads song, he’s lived all over this town. The

Daddy and Cash Money fame), Pitbull is more determined than ever to rap about the

real: “Not the Miami Vice thing,” he says. “I looked around and that’s not at all what

Miami is. Maybe that’s 25 percent of it, but…” Pit’s voice trails off as he looks out

from his porch at his Wynwood neighborhood and its nearly forgotten people.

Pitbull says his mission is to make sure Miami gets its hip-hop props, and he takes it

seriously: “Miami has not been respected. It’s been a dope-dealing city it’s been a

ballin’ city, we’re like the New York of the South. That needs to be reflected.”

Pitbull’s rhymes are intensely personal, and he writes them himself. “Each and every

one,” he’ll tell you. It’s the first time in years that Miami’s bilingual angst (as well as

party flow) has been captured, and he’s understandably proud. But unlike most

rappers, he won’t boast about it unprompted. However, when pressed he allows that

he enjoys watching people’s reactions when they first hear his Miamicentric rhymes.

“They can really relate to it,” he says. “They’re like, ‘Wow, how’d you come up with

that?’ or ‘Damn dog, you hit it right on the money.’ That feels good.”

himself. For a guy this young – Pitbull is 21 – he seems to have his head on pretty

straight. Even as the Diaz Brothers and Pitbull prepare to get his yet-to-be-titled

debut CD into stores by September, even as his songs start to break in other markets

Christi, Texas), even as the girls and boys at the Beach House pump fists in the air

for a real local hero, you can see that as caught up in the moment as Pitbull is, he’s in

it for the marathon, not the sprint. “I hate the fake stuff this fiction-ass game is

about,” he says. “The same kids laughing [at me] before are now trying to get into

VIP with me. All that fame stuff is too expensive. It comes at too high a price. I wanna

be the Tony Montana of the rap game…’cept I’m gonna be killing ‘em on wax. I’m not

of hard-earned self-preservation. But beneath that lies a striking kindness. “I’m just

a real person,” he says. “My goal is to be the type of person that says, ‘This is my last

is to get the crowd to see themselves reflected in him, go a little wild and have a

little fun. As he gets the crowd goin’, he’s repping hard. “When I say, ‘Where’s Miami

The crowd yells, fists in the air, and a new kind of Miami hip-hop is upon us.