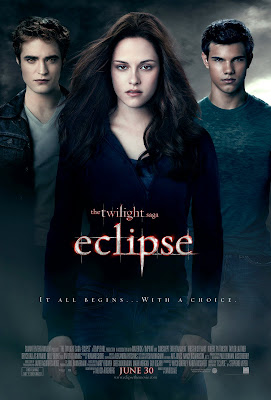 Enter to win screening passes for Monday, June 28th and VIP wristbands for a special event for Saturday June 26th.
There will a “Lunar Eclipse” event in on June 26th. This event will have a red carpet with talent from the film and later in the night there will be a screening of NEW MOON in preparation for the release of ECLIPSE. This exclusive event will also have booths with henna tattoo artists, fortune tellers, food and beverage as well as promotional items.
To enter for both giveaways please send all your contact information (mailing address) to: contest@generation-n.com
The winners will be chosen on Thursday, June 24th…good luck!!!

Synopsis: In THE TWILIGHT SAGA: ECLIPSE, Bella once again finds herself surrounded by danger as Seattle is ravaged by a string of mysterious killings and a malicious vampire continues her quest for revenge. In the midst of it all, she is forced to choose between Edward and Jacob – knowing that her decision has the potential to ignite the struggle between vampire and werewolf. With her graduation quickly approaching, Bella is confronted with the most important decision of her life.

Summer Solstice 2010: Why It’s the First Day of Summer

Behind the scenes with Suenalo on n life –