The Story of Latin Music on PBS. AMAZING trailer below.

ñ Dares ANYONE to watch the preview below and not have their hairs stand on end. Wow. Freakin’ WOW.

This is our version of The History of Rock n Roll. And it’s wonderful. PBS Four part series airs beggining tonight check your city’s PBS stations for listings – (in tha 305 it’s WPBT – 2HD) – it’s exsaustive, great and exciting – so hit it. The NY Times Larry Rohter as a great write up on it – Just click on the pic of the great great Bobby Sanabria to go to the piece. And watch it. Kudos to Series Exec producers Adriana Bosch and Elizabeth Deane and the series producers of the 4 individual parts – each as exciting and original as the material itself. By the way – ñ’s own Joe Cardona produced the 4th and final part of the series which as Jordan Levine pointed out in the Miami Herald, “credits Gloria and Emilio Estefan for pioneering that crossover, and the shrewdness of pop architects like producer Desmond Child, who talks about designing the video for Livin’ La Vida Loca so that Martin seems like a modern-day Elvis Presley, a reincarnation of a familiar pop icon.” 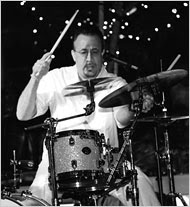 The Story of Latin Music on PBS. AMAZING trailer below.

It’s snowing on the Bubble