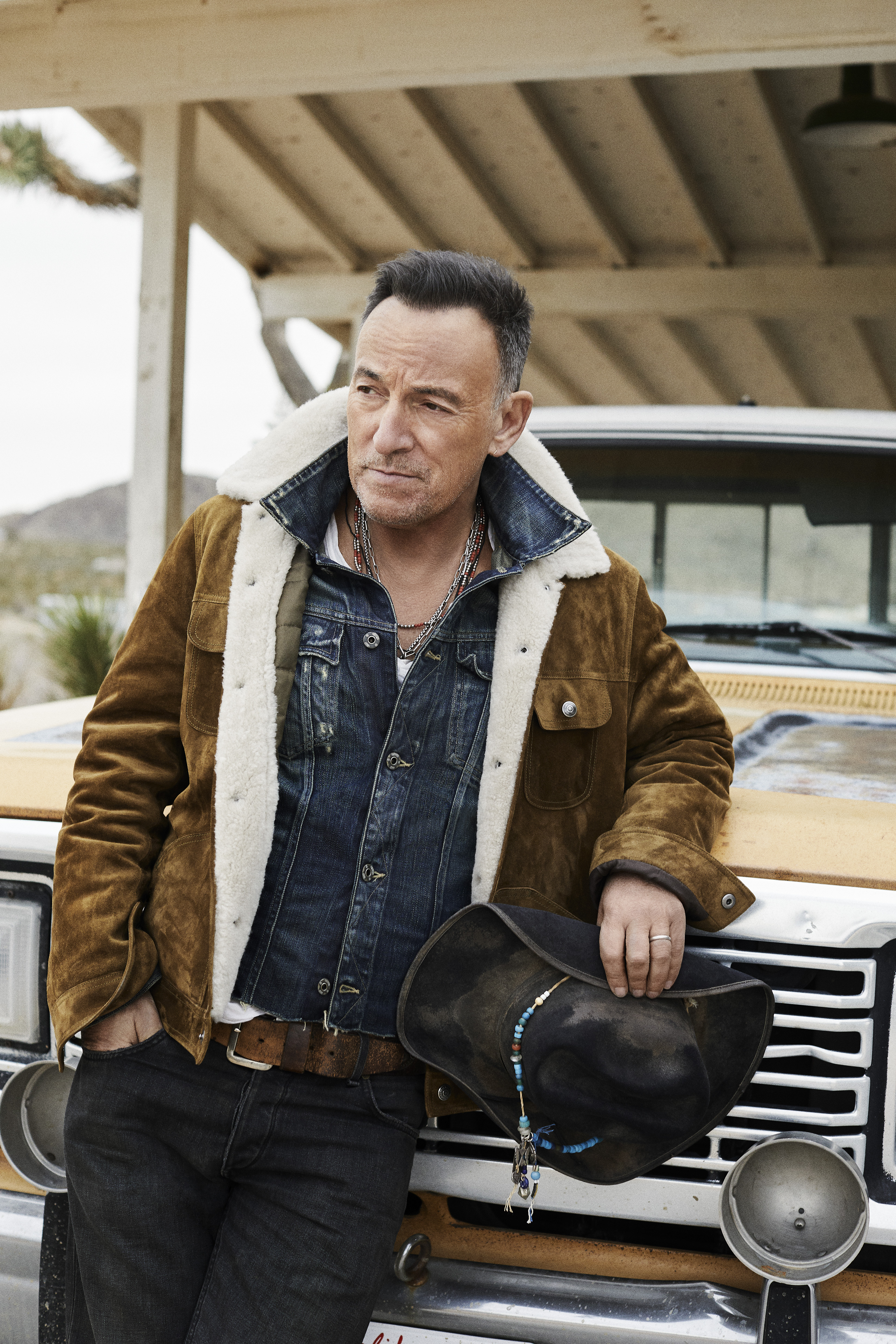 The Sky Above and the Myth Beneath It:

I’ve grown to love what I used to consider Dad Movies. As I’ve gotten older, the stoic, loner characters in the movies that my father liked, often Westerns, have become more relatable to me.

My disappointments in my poor decisions, certain choices and their consequences, the ones that start to sink in when your late 40s roll around, have forced me to close myself off a bit. As I’ve gotten older and maybe a bit heartbroken, I understand his heroes more. That stoicism of middle-age and beyond, is reflected in Bruce Springsteen‘s beautiful new album Western Stars, which I’ve been listening to a lot in in the week since it came out.

Springsteen has mentioned in interviews that he’s had the album finished for a few years prior to its release on June 14th, so perhaps it was crafted around the time when he first started speaking publicly about his struggles with depression – something he discussed in interviews promoting his best-selling memoir and Broadway show – and the characters in these songs have forced an isolation on themselves that may have roots in that same melancholy.

These characters, some scared of their own dark hearts – keep to themselves, and cloaking themselves in a bit of myth, seem to have found some sort of grace. Their tales inform the soaring music here, which recalls the Western flavored California pop and Nashville Countrypolitan that Springsteen has said he hoped to evoke – well he’s done so, and elegantly.

In the stars and the vistas of the American West, the powerful metaphors Springsteen likes to use are gloriously present. In the press he’s spoken about this album’s cinematic quality, and the orchestral compositions make the listener long for him to score a film. His collaborators here include John Brion, who crafted exquisite music for many of P.T. Anderson‘s early films (for more movie related Bruce, check out his lush cover of Once Upon A Time In The West from the tribute album Everyone Loves Ennio Morricone) and the cinematic sweep of the compositions echo it’s ideas about the West, and the iconic images derived from it – born from the movie cameras (and cast-aside players) that litter the landscape.

In Dave Marsh’s wonderful book about Springsteen, Glory Days: Bruce Springsteen in the 1980s , he wrote about Bruce’s identification with Ethan Edwards, John Wayne’s character, at the end of The Searchers, Ethan standing in the doorway, not being able to enter and join the community. Though Springsteen clearly did make a choice to enter, and fully engage in all this, this album is pouring out some whiskey for those who, like Edwards, just can’t come in.

The perfect pop craftsmanship on display makes one grateful for the walks in their lonely shoes, set to some subtle but seriously catchy music that grows more unforgettable with every listen. I’d guess that for Springsteen, these songs are stories of roads not traveled, yet acutely observed – maybe he came close to driving down those streets into the darkness. On this album that heretofore rarely glimpsed unreliable narrator of Lucky Man (on the B-Side of the Tunnel of Love single) who ‘don’t miss no girl, don’t miss no home, he travels fastest who travels alone’, has a chance to get out of the car, stretch his legs and tell his stories.

Compared to the character based writing in another California set Springsteen album The Ghost of Tom Joad, these guys have different kinds of problems. The people in that other starkly West Coast set tunes have had a tough America thrust upon them, and they’re burdened with brutal issues of class and race which force them to the fringes of society; Mexican immigrant Louis Rosales, burned to death in a meth lab explosion while trying for a better life, or Little Spider, the young hustler who’ll also meet a sad end, seem at the mercy of what Springsteen has referred to as ‘the crushing hand of fate’ – while on Devils & Dust (at least half set in the West) things are a bit more hopeful at times. The Western myth is a touchstone for young African-American Rainey Williams, who dreams of being a cowboy and riding horses to escape the world around him, and the narrator of Long Time Comin’ sounds a bit like Bruce himself, “stumbling into my own manhood”, as he’s put it. Maybe this is the same guy who once called out to Rosalita, now camping under the stars with her and their first child and feeling another baby kicking inside her, happy and grateful for 2nd chances and praying he “won’t fuck it up this time.”

By contrast the fellows in Western Stars are a bit more blinded, everything is a bit too bright. Fouled up by Hollywood and fear as much by their own visions of manhood and all the clichés that turn out to be true. This is the world of the strong silent type (the aforementioned Duke Wayne even gets name checked in a song), and we are in the land of exiles. Gentlemen running from their own hearts, seeking refuge in an image. It’s not all lament, there’s bouncing, ravishing music throughout – and a respite in the happy hour of joy and pomp and Mariachi horns at Sleepy Joe’s Cafe or the hard-won hope of Tucson Train.

As a child i craved all the brightness I could stomach – and was confused and scared by the actors my father liked. I was a kid, and opted for the smiling sunshine of John Ritter and can-do good-nature of Arthur Fonzerelli (winningly played by Henry Winkler), I chose the cheeky Roger Moore over the cool Sean Connery. I didn’t understand Charles Bronson, or what the appeal could be. I didn’t understand the ranchers and the horses and why smiles were so hard to come by.

On Western Stars though, impassable men, prone to the weirdly heroic gesture of solitude as a way to stop hurting people – and maybe stop making mistakes – are not lamented, and they’re not quite celebrated, but they’re accepted. Regret casts a big shadow in these songs, but not quite as big as the sky.

Springsteen may feel lucky (and guilty) to have escaped the fate of the guys in Born in the USA or State Trooper, but he’s grateful enough to cast a look back and tell their stories, and throughout Western Stars, although he may have avoided being these guys, part of him clearly understands them – a part he ruminates on, even if the real boss is going home to his wife-n-kids. This movie-drunk album, like the land it’s about, is rife with illusion and performance. Motion Pictures are as much of a magic trick as that Broadway show he put on – and an even more seductive one. Some people become characters in some unmade film or cling to a moment, even a fictional one, to hang a real life on. In keeping with the picture shows, it’s ‘first person’ most of the way here. And In a gorgeous Thom Zimny directed video, Springsteen even does some killer acting on a pretty meta film set (and thank you Thom for that shot of the El Camino driving through the desert that’s so pretty it hurts).

I’d bet the guy in There Goes My Miracle is torn up about his stupid actions, watching his miracle walk away. But the music swells and sounds so romantic it wonderfully belies the poor gent in the song, as much a victim of his own dumb nature as he is dwarfed by sunsets and moon rises – small before the earth’s magic, and framed by a destiny that decides he’ll have to play the part of the fool. Patti Scialfa, of the E.Street Band, who is married to Mr. Springsteen, provides the striking vocal arrangements on this track (and 3 others) and Ron Aniello who produced the album with Springsteen, provides tasteful guidance for the storytelling and it’s awareness that sometimes love gets away from you, and sometimes it’s too late to catch it. Nothing to do now, but go further inside. Further inside bars, songs and solitude. The lovely music on the album underscores the unavoidable fate of letting oneself (and others) down, maybe as inevitable as day turning to night.

Moonlight Motel, the album’s exquisite closing track, seems to be just down the street from My Father’s House (off Nebraska), but unlike it, it’s not fueled by despair, it’s not terrifying. It understands it’s better to have at least been in it. In fact it comes right out and says, ‘better to have loved…’

This one is all about The Price You Pay, yet it’s old enough to know that a broken heart is not the end of the world, it’s just the start of a long, slow, mostly sad walk to the finish. Consequences are real things in these matters (there’s even a sign at the hotel that reads; “Children be careful how you play”). Some hearts, it seems, won’t ever give themselves a chance to heal.

The characters in these songs aren’t the most dire of Bruce’s broken folk, but that doesn’t make them any less compelling. These are not burned out veterans or immigrants struggling to find better lives across the border, they are not huddling brothers, lost under bridges, powerless as part of their humanity is stripped from them. These are men who’ve chosen the road either out of not understanding their own emotions or by understanding them all too well – and the grand and distinguished melodies heard here make it all as deceptive as Holiday in Cambodia or his own Born in the USA (or Livin’ In The Future).

It’s in what’s unsaid and what’s in the quiet glances that most reveals character for the heroes of the old westerns. And the people in these songs have probably watched plenty of films about loners and listened to a lot of Glen Campbell & Jimmy Webb music. The Wayfarer and the protagonist of Hitch Hikin’ may know they’re living a cliché , but it feels alright. The Hitchhiker is so freaked by a ride with a ‘family man’ spilling his truths that he’ll agree to anything, he just can’t get out of that car quick enough. On a truck flying down the road with a kindred rambling spirit is where he’s most happy. There are no romantic illusions about noble paths, or cowardly ones, there are simply decisions. Booze and loneliness over pills and therapy, a choice emboldened by the movie cowboys our daddies loved.

Little Steven’s Enchanted Spell Cures It All With Love. Again.