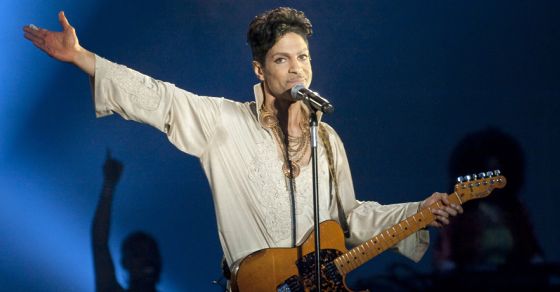 I was dreaming when i wrote this… forgive me if it goes astray.

So it’s Juan De La Luz and i, at The Orange Bowl stadium on April 7th, 1985 on the last night of the Purple Rain (album) tour for what Prince promises will be his Last Live Show – and we’re all 72, 000 snapping our fingers in a way that it sounds just like rain and we’re rapt. And it’s almost summer in 85 and i’m about to graduate high school. Or it’s a year earlier and i’m in my 66 Ford Mustang fastback on the way to pick up Pam Roth for a date and Let’s Go Crazy comes on and as a wonderful writer in Musician magazine once put it, (who’s name escapes me and i’m embarrassed by that) more or less; “In the summer of 1984 if Dancing in the Dark made you pull your car off the road and listen, then When Doves Cry made you crash into a tree”. ‘Cept for me it was Let’s Go Crazy that got it’s hooks in. I was where Segovia meets Bird rd. waiting to make a right and i remember when it came on the radio. So i brought that Purple Rain vinyl at Specs, saw the movie the night it opened at the Miracle Theatre on the Mile. I talked Prince with the guys at Brodie’s Gym in Miami Springs that year, and the biggest guy in the place was a bit puzzled, confiding in me, “My girlfriend loves him so much… and i think to myself.. this little guy? But the ladies flip for him”.

He was underground before there was underground. He was Peaches before she was Peaches. And speaking of that, there was the cover art to the Peach 12 inch, did you ever see it? Aw, but 16 or 20 years before that, it was Dirty Mind and Controversy. “Do i believe God? Do I Believe Me?” There was Dr. Fink. And there was the water in the tub, and the girls who’s names i don’t even have to mention, cause everybody knows.

But there we were at the Orange Bowl, “he’s retiring after this… he’s going to go looking for The Ladder”, we said. We were 17. There was the cool older lady who was at the concert alone – she slipped us beers from her purse (which was insulated like a cooler), “You see, Prince’s daddy used to beat Prince’s mom… and Prince was against that”, she explained as we watched the concert from the very back of the OB.

And there was opening night in ’93,( i guess he didn’t really retire) at the Sunrise Musical Theater on what would become known as the Act 1 tour, when my pal and I got to our third row seats with our lovely dates, and were greeted by a security staffer; “Good news and bad news guys, bad news is there’s someone that has to sit in your seats… good news is you’re going to the front row”. We were thrilled to be up front when the announcer came on the loudspeaker, “Before we start the show… we’d like to acknowledge Princess I Don’t Remember and her father King Whatever who are our guests tonight”… and then… the sounds of a scuffle, people fighting for the microphone…then.. “Give me that Mic.. there’s no king.. there’s only Prince!” With that there was an explosion from the stage, the band swung into My Name Is Prince and he appeared through the smoke, jumped off stage and started Sword-fighting (with a freakin’ sword) vs. the Princesses bodyguards in the rows behind us, till he put her on stage and she started stripping to the music. The princess turned out to be Mayte, who shed most of her garb till she rocked a pink bikini, and who he’d go on to Marry and have his only child with… now THATS how you start a rock concert.

Aw, but before all that he was underground. John Cougar (when his name was just that) would walk on stage with a boom box on his shoulder blarring Prince – “this is what you should be listening to”, he’d say. Then ten years after that there was Batdance – and all that accompanied it – which i didn’t care for, but there’s this quote from Jon Peters to Michael Goldberg in Rolling Stone mag in ’89, about that soundtrack:
“In a way Prince IS Batman,” says Jon Peters, who coproduced the new motion picture Batman. “He’s a very dark character, and he’s complex and kind of mysterious and explosive” – I didn’t like that record but i like the idea that Prince is Batman. Cause that makes me sort of Batman too.. weird hours, late night drives, caves and supercomputers.

So it’s Religion and Sex and Beautiful Women and when Cat the dancer would take over on drums so the Gloriousness that is Sheila E. could come out from behind the kit and rap that great bit to It’s Gonna Be A Beautiful Night, (the Sign Of The Times version ‘recorded live in front of 6,000 wonderful Parisians’ according to the liner notes). On the album version i think she raps over the phone. Of course Sheila Escovedo raps. She’s in Krush Groove. Sheila guest stars in the ultimate All Time B-side too, Erotic City, ‘We can funk until the dawn, makin’ love till cherry’s gone’. Everyone squealed, “Oh my gosh.. did you hear that?! What did she just say?!” And it’s Raspberry Beret and the coughing in the video.

And its Jerome bringing out the mirror for Morris Day, and it’s The Time’s Comeback album Pandemonium and it’s immortal single Jerk Out, which i still play all the time. And Prince Rogers Nelson was a window into all of it – and he didn’t go by himself, he gave his friends from Minneapolis, Minnesota a leg up if they were up to taking advantage of it. And he and Madonna have a duet on the Like A Prayer album that i only heard once. That album was scented so it smelled like a church. And that track wasn’t great – it wasn’t like a pervy Baez and Dylan, but it shoulda been.

It was Pop LIfe and I Could Never Take the Place of Your Man and If I Was Your Girlfriend and Adore and Why You Wanna Treat Me So Bad? and Starfish and Coffee (song) (*holy cow, Starfish and Coffee alone… ) and The Most Beautiful Girl in the World and I Wanna Be Your Lover and Baby I’m a Star and Slow Love.
I forget who wrote that artists hit a point where they chose to turn inward, and into themselves or outward to the audience. Maybe, that’s what he wrote – i don’t remember is exactly. Fill in your favorites and figure it out. I just know he made such good music. It provided me so much pleasure. Those The Hits/The B-Sides records? How much groove and melody and heart and beat is in there? My gosh his music is so good. “It’s only mountains, and the sea. There’s nothing Greater, You and Me”.