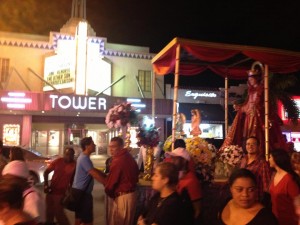 * Note: Once in a while something is so lovely and beautiful and heartfelt in the most unexpected places – and on my Facebook friend feed was this lovely essay and pic by Corinna Moebius that she wrote after Wed’s Dia de Santa Barbara – i asked her if i could share it on the ñ blog and she said yes, so if you love beautiful writing and real grace i urge you to check it out below. And for more info on la pequeña Habana check out her online magazine & excellent site and resource Little Havana Guide

Just returned a little while ago from the Misa and Procession for Santa Barbara, a Catholic Saint syncretized with Chango, the African deity of justice, of the drum, of the thunderbolt… and so much more. In the little church, la Iglesia d
e Santa Barbara, Catholics and Santeros sat side by side, most people dressed in red and white. I recognized neighbors: Cubans and Central Americans. There was a blind lady there, and a distinguished looking Afro-Cuban guy dressed all in white with yellow shoes and a yellow scarf dangling from his back pocket, who drove up to the church in a fancy three-wheeled, motorcycle-type vehicle.

Eight mariachi musicians in fancy red outfits provided the music for the service. I learned later that the group is comprised of Mexicans, Venezuelans and Cubans from Kendall! A Cuban hairdresser named Luis made the gorgeous red cape for the image of Santa Barbara that we later brought through the streets of Little Havana. We walked up 6th Street, our group led by a drum and brass band from Overtown that was originally formed in the 1920s, when Miami was still segregated.

We sanctified the streets with the blessings of Santa Barbara as we walked through it with her glorious image, remembering the words of the Padre, who spoke about justice, about immigrants being misunderstood and detained, about political prisoners in Cuba and elsewhere, and people everywhere who suffer from persecution, discrimination and torture.

We walked up 6th street, past little kids peering at us from windows, tough tattooed guys (one of whom joined us), old folks crossing themselves, a guy who lit a sparkler and blessed us, saying (in Spanish) I love my Saint Chango! An SUV slowed down and the driver threw flower petals from his window and onto the image of Santa Barbara as she was being carried. A local transvestite (in his/her dress), joined us. A Muslim lady in a hijab watched us with interest.

We walked not only to bless these streets but to bless those in places and times far away, walked by people who risk(ed) their lives for the sake of others or to stand for who they are and what they believe no matter how scared they may feel inside. We walked to claim these streets and at the same time defy every border of segregation and subjugation. We walked to honor those who have fought racism and discrimination and injustice in any form.

The drummers tap-tap-tapped away and the trumpets heralded “When the Saints Go Marching in …” Do you know the words?
“We are trav’ling in the footsteps
Of those who’ve gone before,
And we’ll all be reunited,
On a new and sunlit shore …
Some say this world of trouble,
Is the only one we need,
But I’m waiting for that morning,
When the new world is revealed.”

Happy Chanukah to all our Jewish Peeps!