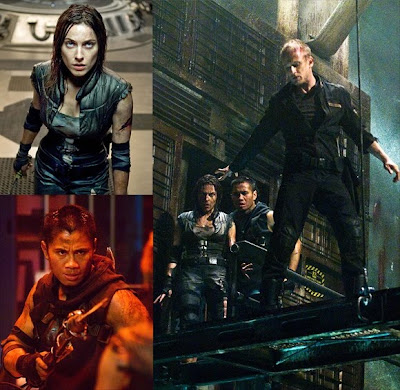 ñ and the makers of the terrifying Pandorum want to get you some FREE tickets to the sneak preview of this great Sci-Fi Thriller. The preview is below -but the plot is as follows: Dennis Quaid and Ben Foster (3:10 to Yuma, Alpha Dog) join Cam Gigandet (Never Back Down, Twilight) and Cung Le (Tekken, Fighting) to tell the terrifying story of two crew members stranded on a spacecraft who quickly – and horrifically – realize they are not alone.
You see, when these two astronauts awaken in a hyper-sleep chamber aboard a seemingly abandoned spacecraft. It’s pitch black, they are disoriented, and the only sound is a low rumble and creak from the belly of the ship. They can’t remember anything: Who are they? What is their mission?
With Lt. Payton (Quaid) staying behind to guide him via radio transmitter, Cpl. Bower (Foster) ventures deep into the ship and begins to uncover a terrifying reality. Slowly the spacecraft’s shocking, deadly secrets are revealed…and the astronauts find their own survival is more important than they could ever have imagined. Creepy preview below.


If you wanna go… and who wouldn’t if you like scary stuff? Well then we wanna get you tickets! – Just email us your
Name:
Email:
Mailing Address:
Phone #:
to contest@generation-n.com
and if you’re among the first to send it in, we’ll send you tix to our screenings.
Good Luck ñ Peeps – and start emailing!