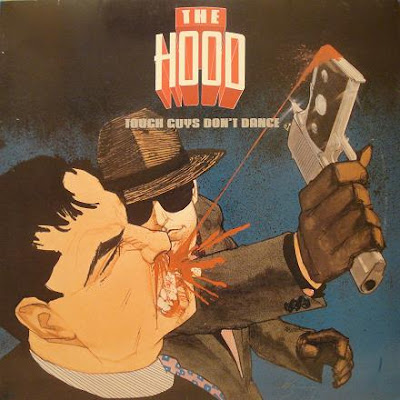 John Hood, subject of the premiere episode of Arte Palabra – recently threw some extra goodies into his boggitey blog. He included some links and stories to some tracks he recorded in the early 90s when he used to record as The Hood. Who else but Hood would create dance music named after a Norman Mailer book (One Mailer famously made a horrid – but funny -film of )? Hood tells stories and lets us listen to some dance music made in Brussels. Like the song says baby : Tough Guys Don’t Dance.

BTW: The cover art is by Howard Chaykin, who made the wild and crazy underground comic Black Kiss – (and the ‘set in miami – oughta be a film’ Bite Club about a family of Nicaraguan Vampires).

Hood is true to concept throughout these releases – he just posted a link to It Takes a Thief inspired by the ‘ol playboy thief 60s TV show with Robert Wagner. Just click on the It Takes Thief Logo. Go on John. Let ’em know who you are baby. The subject of the forth coming 2nd ep of Arte Palbra, NY Times writer John Leland – reportedly reviewed Hood’s record – once upon a 90s time. Everything is connected.