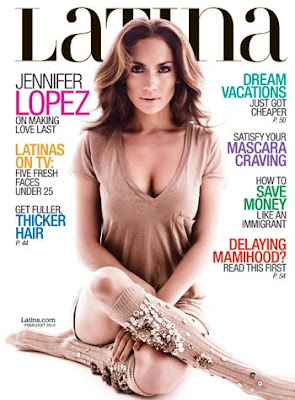 In this month’s Latina mag (who named us Hot Thing on the Web last year THANK YOU!) J.lo talks to Shani Saxon-Parrish about life, love and the pursuit of happiness. Click on the Pic for the link to the story. Here she is on Why El Cantante was Oscar Worthy:

“I feel like I had that [Oscar worthy role] in El Cantante, but I don’t even think the academy members saw it. I feel like it’s their responsibility to do that, to see everything that’s out there, everything that could be great.” “Well, it is a little bit frustrating. It was funny; when the Oscars were on, I had just given birth on the 22nd, and the Oscars, I think, were a day or two later. I was sitting there with my twins—I couldn’t have been happier—but I was like, ‘How dope would it have been if I would’ve won the Oscar and been here in my hospital bed accepting the award?’ ‘Thank you so much! I just want to thank the academy!’ But we joked about it. It’s all good. Things will happen when they’re supposed to happen. I have the utmost faith and no doubt that it will one day, when and if it’s supposed to. You can’t get all crazy twisted over it.”