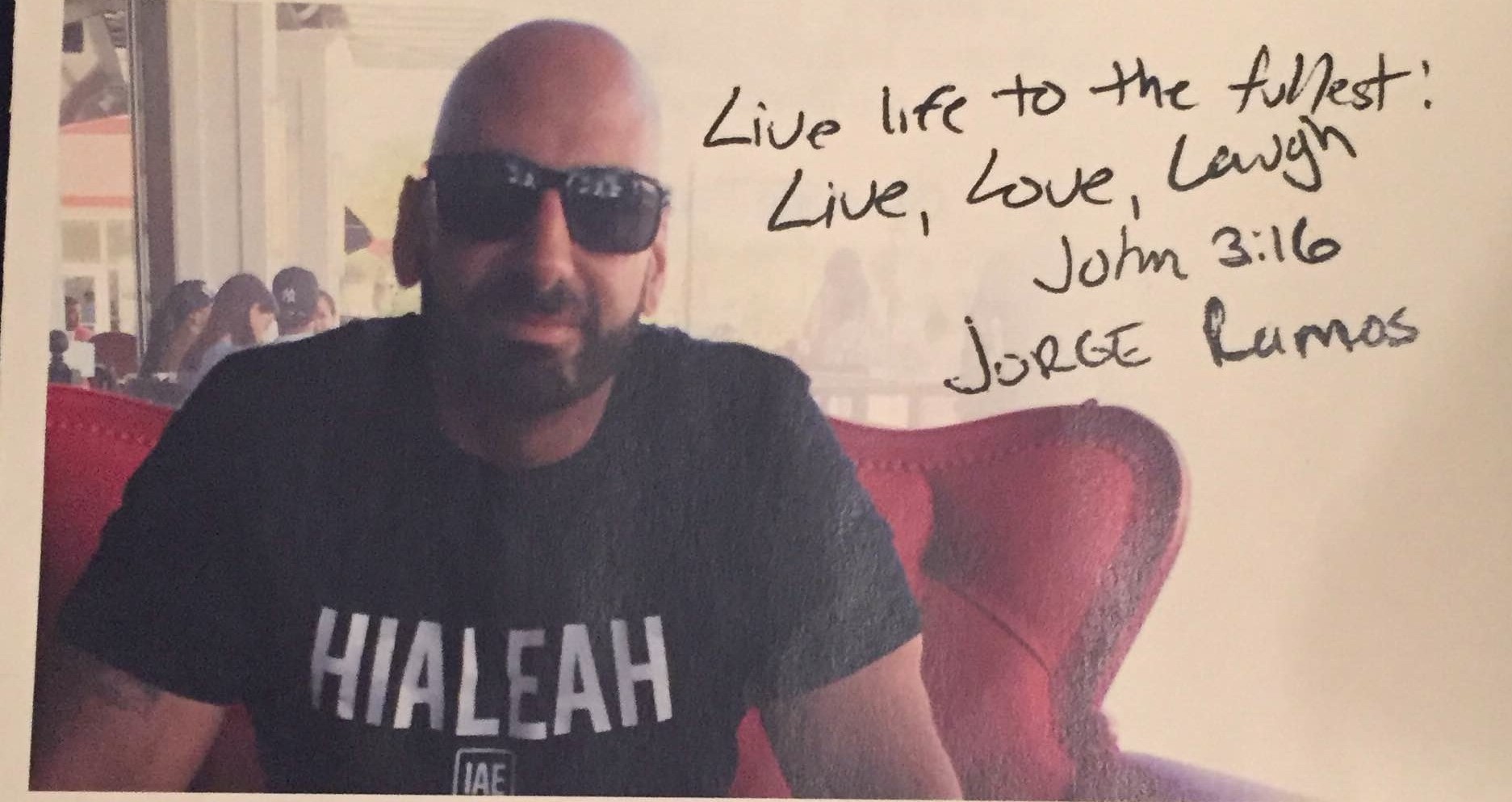 These kind of people are Rare. Here’s Something for Sgt. Jorge Ramos

I had driven 90 minutes to Miramar to pay my respects to a guy i’d only met a handful of times, but who made an impression as strong as many lifelong friends. The kind of guy who literally was the nicest guy i ever met. The amount of people at the Funeral – it was just not what you expect for a normal human being. But this man, and the way he lived his life – was clearly extraordinary.

There are certain types of people that you cross a room full of 5 or 6 hundred people to say hello to, no matter what. And he was the kind of guy you do that for, but he was also the kind of guy who would do it for you.
It was because he was so generous of spirit. Whenever i saw him it was such an infusion of positive energy that i can’t describe it. You were just jazzed with energy and positive vibes.

His funeral was one of the most diverse crowds of people I’ve seen in a room in Miami. So many different people of diff races and backgrounds – but all clearly touched by this spectacular guy.

When his friends spoke about him, i felt happy to see that that there are people who have friends like that – it was the kind of powerful thing where you leaving thinking, ‘I need to be a better friend to people’. That was not a normal turnout or a normal moment.

I don’t think Jorge was even 40, but i have never seen a turn out like that – EVER. Not business people or ’cause i have to’ just 100 % pure love. He must have been a person of otherworldly , spectacular energy – to have inspired this kind of love in people. Like i wrote just above, He was the kind of guy you run over and say hi to and he was the kind of guy who would cross a room to take a selfie with you, and make sure you looked great in the selfie. 🙂 It wasn’t that though… it was the energy.

The crowd, and it was a crowd, standing room only is an understatement – his wife Milagros projected on a video monitor for those of us outside, and even more folks outside those doors. Cars parking anywhere, folks scurrying to come inside and pay their respects. It was the kind of turnout one expects at an athletic event. His wife speak about him, his best friends, my friend Carlos Alvarez talked about growing up with him and each story was more funny and touching than the next, though nothing could top his wife’s beautiful tribute to him.

His funeral was as unorthodox as he was, i imagine. Jeans and t-shirts were the suggested attire , HIALEAH t-shirts for all the folks who spoke, music playing, all his close friends and family told stories from the stage – his friends talked about learning lessons from him – to stand by your friends, to stay and have that one more beer with a pal, to stay and dance to the last song, to laugh, to LIVE.

The first of the handful of times I really spoke to Jorge – I was filming a video for Carlos Alvarez at the school he’s principal of, Hialeah Educational Academy. Jorge was at the batting cages – i think he was training some folks there – or just hitting, i don’t quite remember – but we said hi, figured out his wife was my son’s kindergarden teacher. We spoke for just a bit.

And every time after that that we ran into each other , through mutual friends , work things or whatever – he had a smile that lit up the room, an energy that was boundless – an energy that would literally jump out of him and stand next to you in a room and follow you outside. An energy that seemed to stem from his love of life – all of it – and we’d talk crossfit , or music or whatever.

You could tell this was the guy that kept his old friends together , the glue , the rock. Hialeah strong and Hialeah proud.

His wife, who’s strength and power rival Jorge’s, told us to refer to him in the present, cause he was here with us. So, although i didn’t really know you well sir, i wish i could have gotten to know you more, you can tell you are pure loyalty, laughter, kindness , friendship and love.

You can tell you lived life like you meant it – i’m gonna try to be more like you man, try to enjoy a little bit more, take a little more pride in everything. Everyone i spoke to was mouth agape at a life well lived. We all said to each other, ‘we need to be more like Jorge’.

You really made quite an impression in just those few times i got to hang with you. Clearly that was the case for most – i’ve never seen a turn out like that. i was standing next to Victor, who’d met you just a few times, Ina who you’d prob met once. Maybe. And Lynn, who went to pace too, and Lourdes who couldn’t stop crying and… man.. that was just something where you could tell if this guy touched your life just one time it made an impact. Magic like that is hard to come by. But in this case – i was proud to have even experienced a glimpse of it. Here’s to you Jorge. Man, you’re an Inspiration.