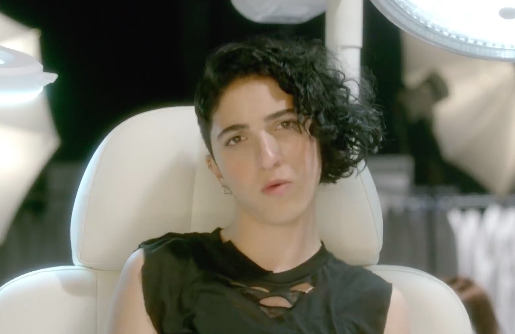 Gen ñ is loving Emily Estefan’s new video
Last Week, Emily Estefan released her brand new video F#ck To Be. The concept behind the video shows Emily discovering and noticing a world that it is not what she expected instead it is very sterile and ominous.
“There are two POVs in the video, it is either what I see or what the mirror sees. It is me against the mirror. The mirror being expectations that I carry of myself, or what people expect me to be. I’m combating the mirror, “ says Estefan.
F#ck to Be will be the first single from her forthcoming full length CD, Take Whatever You Want. Emily wrote, recorded, produced and performed her full album at Fairy Light Studios (her own studio in her college apartment in Boston, MA).
“Many people think I am saying “F” everything or everything sucks, but that is not true. I go in and out of these very different looks in the video that I don’t necessarily like for myself, but that doesn’t mean that I frown upon them, it just means that it is not me” said Estefan.
This video was directed by 7-time Grammy award winner Gloria Estefan, who herself has won a Grammy for her video No Me Dejes De Querer.
In 2014, Emily made her singing debut at the iconic Hollywood Bowl performing the classic Where The Boys Are. She also performed, a rousing version of Reach, with her mother, at a Viva Broadway concert at the Minskoff Theatre in New York City and performed her own original song, I Just Want It To Be Over, at the Miami Beach 100 Concert in front of 100,000 people.
Emily is currently studying Contemporary Songwriting and Production with a minor in Philosophy at the prestigious Berklee College of Music and will graduate next year. When she is in Miami, Emily gigs at local venues singing, playing guitar and drums.
F#ck to Be will soon be available on iTunes.