Hi ñ folk – we’re giving away tickets to new flick – touching and stirring new film The Blind Side for our fans in Miami and New York with screenings in Miami on November 17th at 730pm and in NYC on Novemeber 18th at 7pm. Just email your info to contest@generation-n.com We’ll choose the winners at Random this Friday the 13th at noon and notify you then! So be sure to include all your contact info in the email (name, addy, email addy, phone #) – Enter now and win tickets to see this moving film!

Sandra Bullock (“The Proposal”), Tim McGraw (“Friday Night Lights”) and Oscar®-winner Kathy Bates (“Misery,” “ Revolutionary Road ”) star in “The Blind Side,” which depicts the remarkable true story of All-American football star Michael Oher
A homeless African-American youngster from a broken home, Oher (Quinton Aaron) is taken in by the Touhys, a well-to-do white family who help him fulfill his potential on and off the football field. At the same time, Oher’s presence in the Touhys’ lives leads them to some insightful self-discoveries of their own. 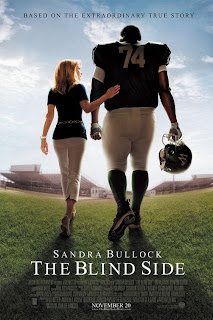 Living in his new environment, the teen faces a completely different set of challenges to overcome. As a football player and student, Oher works hard and, with the help of his coaches and adopted family, becomes an All-American offensive left tackle.
“The Blind Side” is directed by John Lee Hancock (“The Rookie”), who also wrote the screenplay based on the book The Blind Side: Evolution of a Game, by Michael Lewis. Gil Netter, Broderick Johnson and Andrew Kosove are producing the film with Molly Smith, Erwin Stoff and Tim Bourne serving as executive producers.

Sandra Bullock and Tim McGraw star as Leigh Anne and Sean Touhy, and Kathy Bates stars as one of Michael Oher’s dedicated tutors, Miss Sue. Quinton Aaron is introduced in the central role of Michael Oher. The film also stars newcomer Lily Collins and Jae Head (“Hancock”) as the Touhys’ children, Collins and S.J., respectively. The Blind Side opens on November 20th.