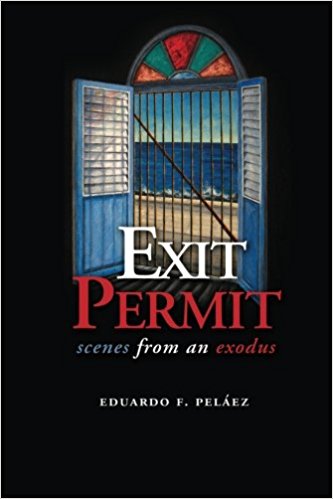 Newly available on Amazon.com is Eduardo F. Peláez’s “Exit Permit”, just published in English after having been released in Spanish In 2007 as “Permiso de Salida”.

The fictional characters in Exit Permit live through the historical events of the Cuban exodus in the 1960’s, facing family separation and the search for identity.

For Felipe and Elena, the main characters, who’ve known each other since their childhood days in Camagüey, Cuba, Pelaez paints a vivid, nuanced picture of life – in swift brushstrokes.

They started dating when they attended the University of Havana and a bright future awaited them. The course of their lives was altered with the implementation of a communist system in their island nation. Although their story as a couple is an imaginary one, it could be that of many Cubans whose careers were severed and whose hopes for a happy life in the country of their birth were destroyed. The narrative, in a series of scenes, some filled with drama, others sprinkled with humor, presents various historical events during the main decades of the Cuban exodus: the missile crisis, the Camarioca boatlift, the storming of the Peruvian Embassy; and difficult situations experienced both within and outside of Cuba: family separation, political asylum, and the required assimilation into a foreign culture. Emotional detachment is presented as the common denominator in the lives of Felipe and Elena: he in exile; she in a homeland that is no longer her own.

Pelaez obtained a Master’s degree in Spanish Literature at Ohio State University, taught Spanish at OSU and St. Charles Preparatory School in Columbus, Ohio. He recently released his second book, “Nostalgias de Tinajón”, (writing under his mother’s surname of Pelaez-Leyva) featuring vignettes presenting the local color and customs of the 1950’s in his hometown of Camagüey, and his gift for bringing the traditions of Cuba to life on the page, as in his other books – is welcome and impressive.

You can find a link to his works on Amazon.com at