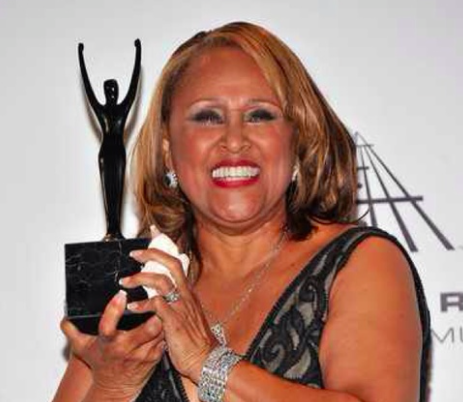 (Columbia Records/Wicked Cool; New York, NY) Capping a week of rave reviews from Rolling Stone, the L.A. Times, Entertainment Weekly, NPR’s First Listen, the N.Y. Daily News (cheering the new album and crowning Darlene Love “part of the pop DNA”) and others, one of the most anticipated albums of this or any year Introducing Darlene Love is available everywhere today, including iTunes, Google Play, and Amazon.

The Columbia Records/Wicked Cool release marks the first new full-length album of original pop songs in 27 years from the renowned vocalist, who has achieved legendary status for her enduring work with Phil Spector and as one of the most prolific backup singers of all time. Now, with the spirited Love deservedly back in center spotlight, the album is being welcomed to worldwide acclaim: “Girl group royal takes back her throne,” heralded Rolling Stone, “Love comes at it like a wrecking ball, husky alto thrillingly intact; “A stunning collection of vibrant, dramatic rock anthems and R&B workouts?’ wrote Entertainment Weekly; “Love singing at maximum intensity noted the L.A. Times, with the above-mentioned NY Daily News praising the album as a “‘soaring work” and revealing that “Love has lost none of her talents and has never sounded more unsinkable.” Electric Review proclaims, “if you’re too young to have experienced first-hand the excitement that came with hearing a new Darlene Love song ache through the jukebox or car radio, Introducing Darlene Love will cast you back to a place of innocence and faith, shepherding you back to a time when people gathered in the misty fields, steadfastly holding to the belief that music was about to change the world.” Produced and arranged by artist/producer/E Street Band great Stevie Van Zandt, it’s more than apparent that his heartfelt mission of re-introducing the irrepressible Love to the world in all her vocal splendor has been affirmed as a rousing success.

Hailed as “a splashy victory lap” by NPR’s First Listen, the album is comprised of all new recordings and features never-before-heard and classic songs from a superstar cast of songwriters eager to join Van Zandt in honoring one of the seminal voices in music history. The Elvis Costello-penned first single “Forbidden Nights” has also been embraced at radio and drawn raves, with Costello and Bruce Springsteen contributing two tracks each to the 14-song album (released on Van Zandt’s Wicked Cool label in partnership with Columbia Records – see full tracklist below) with Stevie Van Zandt penning three songs. Other writers include Jim Webb, Linda Perry, Desmond Child, Joan Jett, longtime songwriting team Barry Mann and Cynthia Weil, and Michael Des Barres, and more. Various before mentioned songs have been championed across several channels at SiriusXM Radio with feature interviews running throughout release week. NPR’s First Listen also praised the Van Zandt/Love chemistry on the album, citing the “dignity in Love’s vocals amplified by Van Zandt’s grand but well-modulated arrangements.”

The irresistible video for the first single “Forbidden Nights” also premiered to an overwhelming response. The jubilant clip catches the charismatic Love and pals cruising the beach sites of Asbury Park, N.J., and features inventive cameos including Costello himself, as well as Joan Jett, Paul Schaffer, Bill Murray, David Letterman, and hilarious glimpses of Van Zandt and buddy Bruce Springsteen. Love and Van Zandt and a stage-full of musicians also rocked Asbury Park’s Paramount Theatre live on September 12, reveling in a vibrant set of album selections kicking off Introducing Darlene Love’s release as well as delivering torrid renditions of some of her back-classics. Two more buzzed-about shows celebrating the album’s release are on deck in L.A.’s famed Whisky A Go Go with the first show kicking off tonight. Headliner Love and Little Steven & Friends will be rocking the bill.

The captivating Love is sure to bring her iconic vocal rendering to the Whisky just as she does on the acclaimed new album. Songs on Introducing Darlene Love include “Night Closing In” (Bruce Springsteen,) “Still To Soon To Know” (Elvis Costello),”Love Kept Us Foolin’ Around” (Linda Perry), “Who Under Heaven” (Jimmy Webb), “River Deep, Mountain High” (Phil Spector/Jeff Barry/Ellie Greenwich), and “Sweet Freedom” (Barry Man/Cynthia Weil), among others.

Inducted in to the Rock And Roll Hall Of Fame in 2011, Love’s five-decade career spans some of the greatest signature moments in music. The Los Angeles native (Love currently resides in New Jersey) nurtured her talent early as a member of the Blossoms, a local trio who began their career providing backup vocals for artists such as Sam Cooke and Bobbie Day. The Blossoms also were featured as part of the house band for the popular ’60s music show Shindig, backing up many of the performers who appeared on the series. Love would go on to become one of the most sought-after singers in music history, recording with Elvis Presley, Frank Sinatra, The Beach Boys, Dionne Warwick, The Righteous Brothers, Tom Jones, and dozens of other vocal giants throughout her career. Her early work with pioneering producer Phil Spector on songs such as the trailblazing “He’s A Rebel,” “He’s Sure The Boy I Love,” and “Why Do Lover’s Break Each Other’s Hearts,” would garner her legend status. She is featured in the 2013 Academy Award and Grammy winning documentary ’20 Feet From Stardom,’ chronicling the behind-the-scenes lives of background singers. Darlene’s annual holiday performance of her classic “Christmas (Baby Please Come Home)” on Late Night With David Letterman became a holiday viewing staple.