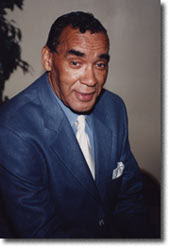 That’s what Debbie O. Yelled in my ear the first night he was at Starfish. He became a bit of a regular there, a legend mingling with the mortals. But he’d been a legend long before that, and he would be long after.

Wikipedia writes: Pedro “Cuban Pete” Aguilar (June 14, 1927 – January 13, 2009[1]) was a Puerto Rican dancer, referred to as “the greatest Mambo dancer ever”, by Life magazine and Tito Puente. His nickname, “Cuban Pete” was conferred upon him in 1949 in the famous dance hall “Palladium”, New York in reference to the mambo classic song Cuban Pete by Desi Arnaz, and it was endorsed by Arnaz himself.

Read on at his website. Class, Style, Grace and charm to spare. A real legend and a great, great dancer.

Bono, on Sinatra. with great affection.

RIP to a legend who was all class.