Bob Dylan & Will.i.am – A Sign of the End Times 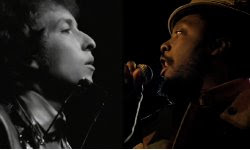 You’re kidding. Before and after the awesome 12 minute Bruce Springsteen concert yesterday a pretty great football game was played. Here’s what we took from the telecast in it’s entirety.

5.) The Cardinals are who we thought they were!

9.) Laughed My Ass Off? Pretty funny!

12.) And finally – in a world where Bob Dylan has already used his music in a Victoria’s Secrets ad – Did anyone see the Pepsi spot where it’s explained that Will.i.am is the new Bob Dylan? What the fuck? Really it’s almost a sign of the demise of civilization as we know it.

Of all the New Dylan’, and in that I include Jessie Colin Young, Steve Forbert & Donovan – Can there be a more lame artist to compare Bob Dylan to than Will.i.am?

Why not compare Bobby D to someone cool like Wyclef, a ground-breaking artist and spokesman for Haiti who combines rock and rap and smashes concepts of what rap and rock n roll should be. Or LL, who, while not exactly Dylan, is still an icon, a guy who has been a part of Hip Hop for 20 years and left a mark on a generation or two. Or Chuck D or KRS-ONE or Melle Mel or even Jay-Z? Or Rev Run? Or …damn man – Will.i.am? I know he wrote a song for the inauguration or something but, what!

How bout Q-tip? Or the fat guy from De La Soul? How bout Bird Man?

Not Common cause Common is kinda secretly a tool. But anybody woulda been better — Masta Ace? Skee-Lo? Was Coolio too busy? Did anyone try calling Tone-Loc?

We won’t make a million easy comparisons among artists and growing up gracefully and blah blah, we’re bored already. There’s not a court in the land that would convict us if we punched whatever ad guy came up with that one.

It’s All Over Now Baby Blue.

Bob Dylan & Will.i.am – A Sign of the End Times