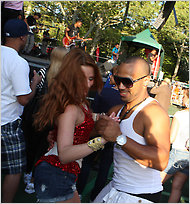 The dancing began early Saturday afternoon at Central Park SummerStage. From almost the first drop of music, couples in the crowd paired off in intimate embraces, sashaying side to side in four-count steps, raising the foot on the fourth beat, the signature flourish of bachata dance.

Bachata Fest, with the singer Alexandra, at the Central Park SummerStage on Saturday, where six acts worked variations on Dominican melodies. The real communication, though, was through the hands, elaborate routines of silent communication, nimble fingers telling inviting palms what to make the rest of the body do. Even the woman who was checking her iPhone while dancing didn’t let it get in the way of her steps, which were liquid and flawless.

READ the rest RIGHT HERE at the NY Times 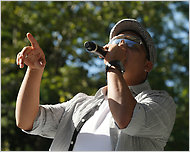 Bill Cruz: One Single at a Time

Rooting for the Expendables