A Pair by Plympton 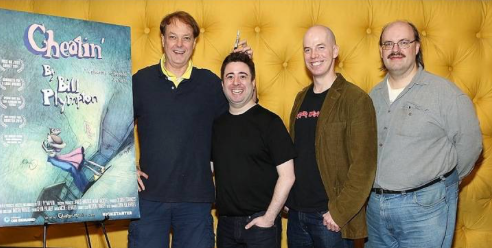 Photo: Animator Bill Plympton, executive producers Adam Rackoff and James Hancock and John Holderried attend the NY Premiere of Cheatin’, which you can catch on Netflix.

There are some big Bill Plympton fans on the gen ñ staff, and we kind of came of age watching the unique works of this maverick animator. I don’t think there’s another animator at his level who is a one man band the way Plympton is, so we’re always on the lookout for his newest stuff. We musta been distracted by the gen ñ goings on – cause we’ve been remiss in bringing attention to his latest work.

The last few months it’s been xtra cool was getting to Twitter-Know, (which is almost as good as real life-know) the co-exec producer of Plympton’s latest films, James Hancock. James is one of the kings of the cinephille side of twitter, and i’ve been following him and listening to his podcast Wrong Reel (my fave) for a bit, so it was a legit kick and thrill to be on his podcast. But that reminded me that these latest two Plympton flicks, haven’t gotten that much luv on gen ñ, so we wanted to bring them to your attention dear reader. Cheatin’ is on Netflix but that’s almost too easy – if you really are a fan of unique beautiful animation rent or buy The Loneliest Stoplight at Vimeo. It’s gorgeous – there’s a preview below and it stars the voice of Patton Oswalt, as the film follows the life and times of a neglected stoplight.
Written and Directed by the one and only Bill, it’s produced by James with Adam Rackoff, and Wendy Cong Zhao.

His other latest film is Cheatin’ also co-produced by James Hancock & Adam Rackoff and of Cheatin’, Variety said, “Strife and sexual humor reign in this energetic romp, one of Bill Plympton’s best longform animated works.” Once you’ve checked it out on Netflix, which we urge, hop over and rent or buy The Loneliest Spotlight, there’s a preview below – and it’s so special it deserves to be seen by as many people as possible.

Kudos to James and Adam for producing animation like this and Kudos to Bill, hope he keeps making his unique visions forever.
-bt

The Loneliest Stoplight from Bill Plympton on Vimeo.

A Pair by Plympton